A SPECIAL feature of the Ascot Angus and Charolais Stud’s annual bull sale at Warwick on Friday was the auction of three cross-bred steers with the proceeds of the highest priced steer donated to the Cherish Women’s Cancer Foundation.

The three Charolais/Angus cross steers were purchased at the charity auction by Bill Gross of Gross Wholesale Meats of Warwick.

Mr Gross said he purchased the steers to support a worthwhile charity in the Cherish Foundation. 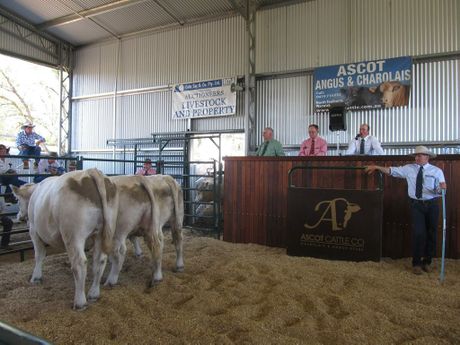 Mrs Chard said the Cherish Foundation was very close to her heart, with a close friend, Paula Hatchman, diagnosed with ovarian cancer in recent years.

“Cherish Women’s Cancer Foundation’s primary goal is to fund clinical trials that result in better treatments for gynaecological cancers that can be developed and implemented,” Mrs Chard said.

“There are 1000 women in Queensland diagnosed with a gynaecological cancer every year – that’s one-in-23 women,” she said.

“A third of these women will pass away from their cancer diagnosis and in this day and age, this just isn’t good enough.” Mrs Chard thanked Mr Gross for his generosity in supporting this wonderful charity.