THIS year’s Paringa autumn on-property Charolais, Angus and Stabilizer sale drew a strong field of 34 registered buyers with a number of states represented.

The highlight of the helmsman auction was lot 8 Paringa Harvey L410, who drew the attention of some of the country’s best Charolais stud producers – Palgrove and Ascot, both from Queensland. The pair traded blows via mobile phone for several minutes with local agent Bruce Elliott placing the winning bid of $25,000 on behalf of Jim Wedge, Ascot Cattle Co, Warwick, Qld.

He recently travelled south to inspect bulls at Paringa, Nampara Angus (from where they bought the $85,000 sale-topper last month) and select other studs, and said Harvey L410 had impressed him with its quick, early growth, finishing ability, great meat traits and “extremely docile” temperament. The young sire’s homozygous polled status was also important to Mr Wedge, who said Ascot was aiming for an all polled Charolais herd.

“We run two studs, a Charolais and an Agus stud, and we’re trying to get the best genetics we can,” Mr Wedge said.

At 19 months, the sale-topping son of Paringa Harvey H338 weighed 793kg. It was the highest $Profit index Charolais of the sale at $11,306 and also in the top 1 per cent for the domestic market index. It is worth noting the three progeny to sell sired by Harvey H338 averaged $10,666. This included Lot 9 Paringa Harvey L417 selling to the second top price of $10,000. 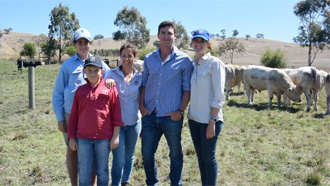 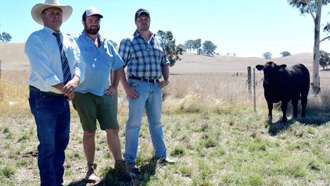 The dominant buying influence was the Northern Territory based Lyndavale Station. The Stanes family bought 11 bulls to a top of $7000, av $4500. No strangers to Paringa this is their fourth visit to the autumn sale, and this time they took home 10 Charolais and one Black Stabilizer to their property about 260km from Alice Springs.

A welcome addition to this year’s Angus offering was the four yearling Angus bulls from Brenton Sessions, Bellaspur Angus. Mr Sessions helps out with AI activities at Paringa, his bulls sold extremely well topping the Angus offering at $12,500, av $7250. His top-priced bull Bellaspur Mohave M1, sired by Paringa Judd J5 weighed 605kg and was purchased by Pat Joyce, Clear Hills Angus, Glenburn. He said now that the highly proven Judd J5 sire was sadly deceased, it was a great opportunity. He will be sent off for semen collection and then used in the stud.

Of the Paringa Angus offering the top price was Lot 47 Paringa Massive M9 selling for $8500.

There were three Black Stabilizer bulls sold with the top price of $8000 paid by another repeat buyer in Brett Schulz, Boorook Morven Pastoral Company, Morven.