DESPITE continuing dry conditions throughout most of Queensland, the Ascot Angus and Charolais stud’s 4th annual bull sale at “North Toolburra”, Warwick, on Friday saw a total clearance of 102 bulls.

The top price of $30,000 was paid for Ascot’s star performer, Ascot Juggernaut, who won broad ribbons for Grand Champion Charolais Bull at both this year’s Brisbane Ekka and Beef 2015.

Two-year-old Juggernaut was by Ascot’s home bred Homozygous polled sire, Ascot Eldorado, out of a top donor dam, Palgrove Estella, and weighed in at 1092kg.

Trading as Manumbar Pastoral, Mr Mather said he had always wanted to become involved in the grazing industry, and bought into his pastoral holdings in 2005. 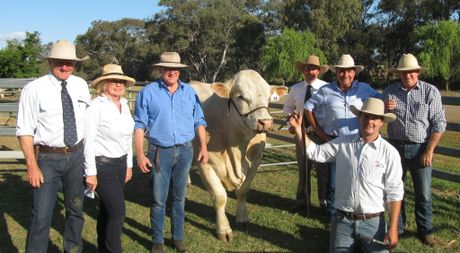 Ascot stud principal, Jim Wedge, said he felt the success of the sale reflected a lot of confidence within the beef industry in both Queensland and New South Wales.

“I was very pleased with the result, considering the season is still very tough in a lot of places,” Mr Wedge said.

Out of a quality donor cow, Millah Murrah Flower, Theo was by Booroomooka Theo, whose semen is rare.

Mr Mather was the volume buyer at the sale, purchasing a total of 14 bulls to run on his company’s six properties, including “Lyndley” at Jandowae and Manumbar Station at Goomeri.

Manager of both “Lyndley” and Manumbar Station, Miles Paterson, said they joined 3500 females annually on the total aggregation. 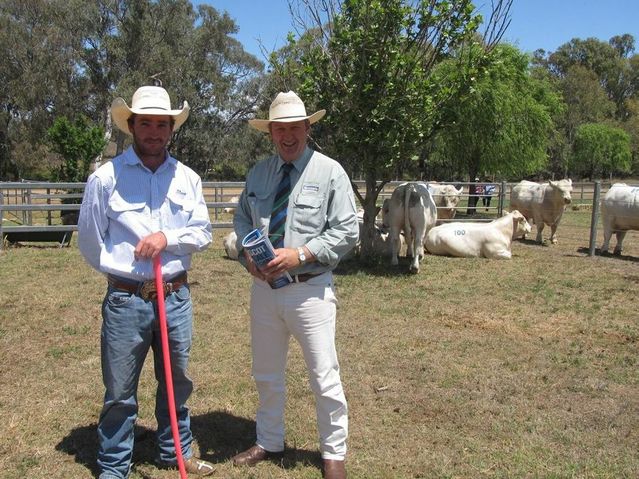 Mr Mather said he was keen to market the semen of Ascot Juggernaut, who would be used on Manumbar Station.

“I’ve never seen a bull like him before – he was one of the best value sires in this industry,” Mr Mather said.

“I really like the Ascot product – they are a big soft bull with excellent feet, and we were very attracted by the Homozygous polled gene in their bulls.

“It is a tremendously professional operation, and no expense has been spared by Jim on quality genetics.”

The second top priced Charolais bull was Ascot Julius Caesar, by LT Rio Bravo, out of broad ribbon winner, Gobongo Juliette, which was purchased for $22,000 by Minnie-Vale Charolais, at Narrabri.

The Goodland family from Clare Charolais purchased Ascot Knockout for $17,000 to use in their stud at Theodore.

Volume buyers of the Angus draft were Logan Cattle Company, “Currajong Park”, Meandarra, who purchased six bulls to a top of $9000, totalling $42,000 and averaging $7000.

Wallangarra buyers, Greg and Errol Saxby, purchased three Angus bulls to a top of $10,000 to average $9333.

Repeat buyers, the Jones family of “Yullundry”, Glen Innes, took home three bulls for an average of $7000 each.

This year’s sale took a big step up with 40 more bulls in the catalogue, and Mr Wedge thanked new and repeat buyers for their support of a sale growing in stature every year.